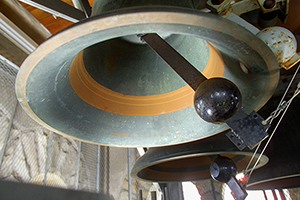 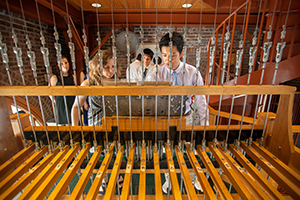 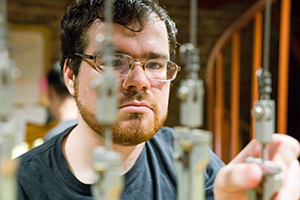 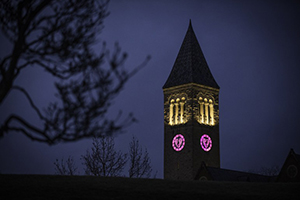 The bells of Cornell, referred to as the Cornell Chimes, are the heartbeat of campus life, marking the hours and chiming daily concerts. The original set of nine bells, a gift of Jennie McGraw, first rang out at the university's opening ceremonies October 7, 1868. Over time the chime has been recast and expanded to 21 bells. Three concerts are performed each day while classes are in session.

The bells are played by student and alumni chimesmasters. The small staff performs daily concerts during the school year and a reduced schedule during the summer and semester breaks, as well as a variety of specialty concerts. Each spring a rigorous ten-week competition is held for anyone interested in becoming a chimesmaster. There is no electronic assistance to the playing mechanism - all the work is done by the player. In the 1940s a chimesmaster received physical education credit for his efforts!

Music of the Bells

Virtually every kind of music is played on the bells, from Baroque to Beatles, Chopin to Coldplay, selected from a collection of more than 3000 pieces arranged for the Cornell Chimes by current and former chimesmasters. There are even duets. Because of the direct link between the playing stand and the clapper of the bell, it is possible to vary the dynamics of the music.

The chimesmasters honor a “3-week rule” where a piece of music cannot be repeated within a three-week period unless it is a visitor request or one of the signature musical pieces. The "Cornell Changes," known affectionately as the "Jennie McGraw Rag," in honor of the donor of the original bells, begins every morning concert. The “Rag’s” 549 notes must be memorized by aspiring chimesmasters. Also played daily are the "Cornell Alma Mater" at the end of the midday concert, and the "Cornell Evening Song" at the end of the evening concert. Listen to the bells.

The bells were originally played on a ground level playing stand before moving to McGraw Hall in 1873. The small tower in McGraw Hall was never intended for the bells, and accounts from that time claim the building shook each time the bells were rung!

In 1891 the university finished construction on Uris Library and Library Tower. At that time, the bells were moved to their permanent home (later renamed McGraw Tower). Local architect William Henry Miller designed the 173-foot tower and adjacent library.

The seven rooms in the tower were originally used to store the library's stacks. They now are home to the chimes office, museum, practice room, and the 1875 Seth Thomas clock with a 14-foot pendulum. The clockworks and pendulum can still be seen in the tower, but a computer now operates the clock.

McGraw Tower gained national attention when a pumpkin mysteriously appeared on the top of the tower in October 1997.

The tower, a symbol of the university is known to take on different appearances during the school year thanks to a LED lighting system. Every Halloween the glowing clock faces resemble jack-o-lanterns. In March the clock faces take on a greenish hue in anticipation of Dragon. Visit our Policies page for more information about tower lighting.

Visitors are welcome at all concerts without a reservation (except where noted). The door to the tower opens approximately 10 minutes before the scheduled concert and closes midway through the performance. Guests must climb the 161 steps, there is no elevator. Your climbing efforts will be rewarded with a unique musical performance and panoramic views.