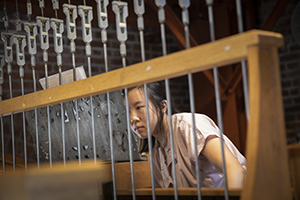 A chimesmaster pays close attention to the music while performing. 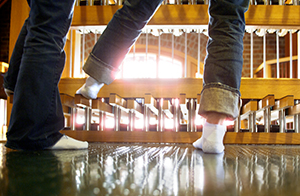 Chimesmasters usually play the bells barefoot or in stocking feet to better feel the foot levers.

The bells are played by chimesmasters. A staff of approximately ten chimesmasters perform daily concerts during the school year and a reduced schedule during the summer and semester breaks, as well as a variety of specialty concerts. The bells are rung by standing at the playing stand and striking levers with the hands and/or feet. Most chimesmasters play the instrument either barefoot or in stocking feet to better feel the foot levers.

Each spring semester, the Cornell Chimesmasters hold an open competition to find new chimesmasters. This ten-week event is open to all members of the Cornell community. No previous experience in bell-ringing is needed, but you should be able to read music, climb 161 steps, and balance on one foot.

Although this is called a competition, the "compets" are not really competing against each other. Rather the chimesmasters look for a certain level of excellence as compets progress through the competition. Typically one to four compets are selected annually to become chimesmasters.

The competition is broken into two parts. In the first round (four weeks), compets become acquainted with the new instrument by learning the three traditional Cornell pieces that are played daily on the bells. At the end of the fourth week, each compet silently plays these pieces for the Head Chimesmaster and Competition Coordinator. In the second round (six weeks), each compet plays two concerts aloud per week. The compet is assigned two coaches, both current chimesmasters, who will provide feedback and mentoring. All of the current chimesmasters listen to the compet's last four concerts and the quality of those performances will be assessed to select new chimesmasters.

If you would like to receive an email in January with more information about the competition, please email chimes@cornell.edu with the subject line "chimes competition recruitment."

Watch a Chimesmaster in Action

Concerto for Two Violins in D Minor played by two chimesmasters on the bells: